When Whistler painted Nocturne in Black and Gold, The Falling Rocket in 1875, British art critic John Ruskin stated that Whistler was merely “flinging a pot of paint in the public’s face.” 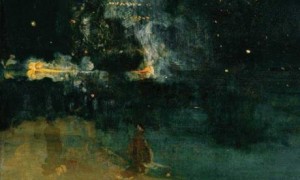 Nocturne in Black and Gold, The Falling Rocket, 1875, oil on canvas

Below is an excerpt from the court transcript where Whistler attempts to defend the importance of his art.

Attorney General: Did it take you much time to paint the Nocturne in Black and Gold? How soon did you knock it off?Whistler: Oh, I “knock one off” possibly in a couple of days—(laughter)—one day to do the work and another to finish it…Attorney General: The labour of two days is that for which you ask two hundred guineas?Whistler: No, I ask it for the knowledge I have gained in the work of a lifetime. (Applause)

In the end, Whistler was awarded one farthing.  (One fourth of a penny.)

May you all find the Fourth of July inspiring.  The Founding Fathers felt that the arts were so important to a new country that they codified the protection of the arts in the Constitution.  So take advantage.  Go forth and create!